I'd eat crappy pizza without being guaranteed a pack of baseball cards.

Promise me some and I'll eat pizza served on a cardboard crust.

Fittingly, Topps, which for the past few years has been about as exciting as tofu, got back to the basics recently by teaming with Walmart to include a three-card pack inside some of its Marketside pre-made foods, including pizza and bread sticks.


These cards aren't half-bad looking, which kind of defeats the allure of food-based oddball cards.

The Walmart in Asheville, N.C., only had a few specially marked pizzas, including the above "Ultimate Meat Pizza'' aka ''Ultimate Dead Meat Pizza.''

Go big or go home, with a possible side trip to the emergency room.

Let's face it, ultimate bypass surgery might be in the cards.

This reminds me of collecting past oddball food cards, like Kellogg's, Dairy Queen and Hostess. I survived eating that crud for cards, all in the name of completing sets. Though now in my 50s, this 50-card set seems especially daunting, requiring ingesting massive quantities of Walmart food.


Give me any vintage high-number quest any day, if health equals wealth, that is.


Hopefully, between COMC and fellow bloggers, I'll be able to turn the trick on these trick cards without risking a grabber.

It's a pizza party and you're all invited to celebrate Opening Day today! 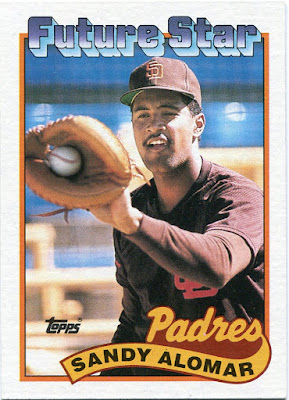 As a cyclist, you're always looking for new riding pals. Since moving up to Western North Carolina, I've met several whom I now consider good friends with which to explore this outdoor wonderland.

OK, I haven't exactly met Sandy, currently the first-base coach for the Indians, or hit the road with him, but through the ap Strava, we follow each other's two-wheeled exploits.

Strava is like Facebook for cyclists, runners and hikers but so much more. It's basically a hopped-up GPS. It tracks your speed, mileage, heart rate and elevation gain in addition to measuring best times over designated segments against other cyclists. After downloading a ride, followers can see what you've been up to. Similar to the "like'' in Facebook, Strava followers give "kudos'' and/or comment.

After I started following Alomar, he reciprocated a short while later.

I have to say I was pretty flattered to get that email. Then, a few weeks later:
He really is following me! Wheel cool!

Alomar began cycling three years ago as a way to stay in shape with a sport that's friendly on an ex-catcher's knees. As cyclists, we're brothers, if only linked through the Internet.

Incidentally, Barry Bonds is active on Strava. I'm following his cycling exploits, too. In time, maybe he'll join my ever-expanding peloton of real and virtual riding compadres.
Posted by Dean at 6:00 AM 1 comment:

FINEST OF THE NINE

DESIGNED TO THE NINES