NAMES OF THE GAME: DICK POLE 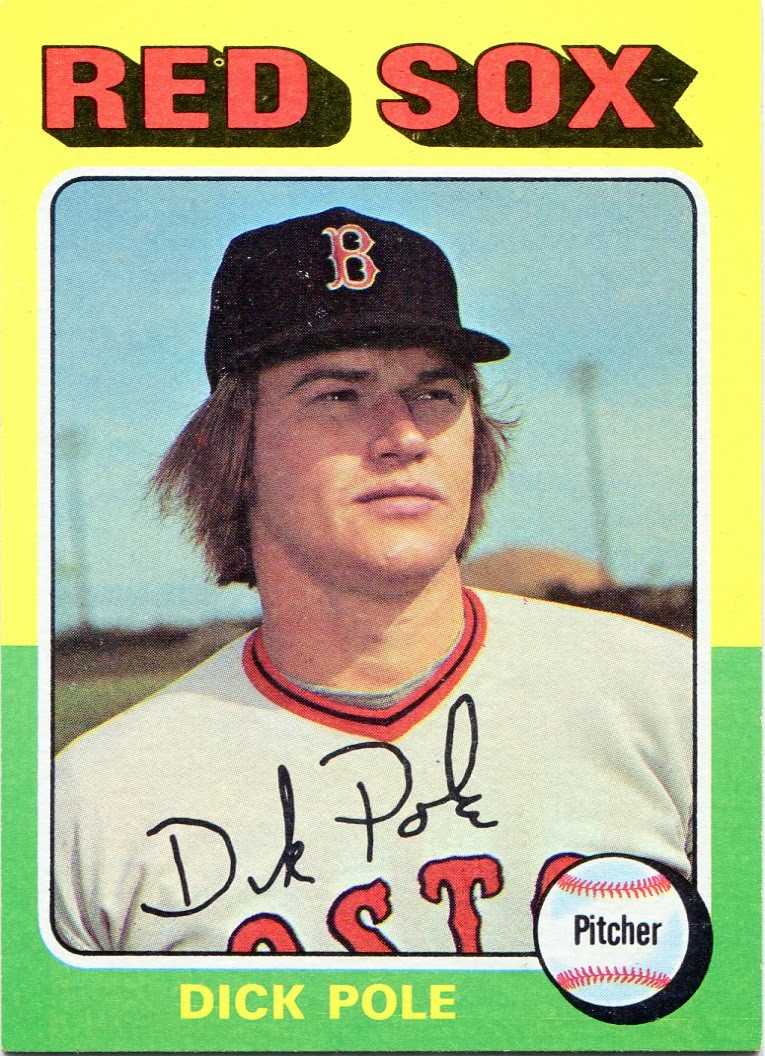 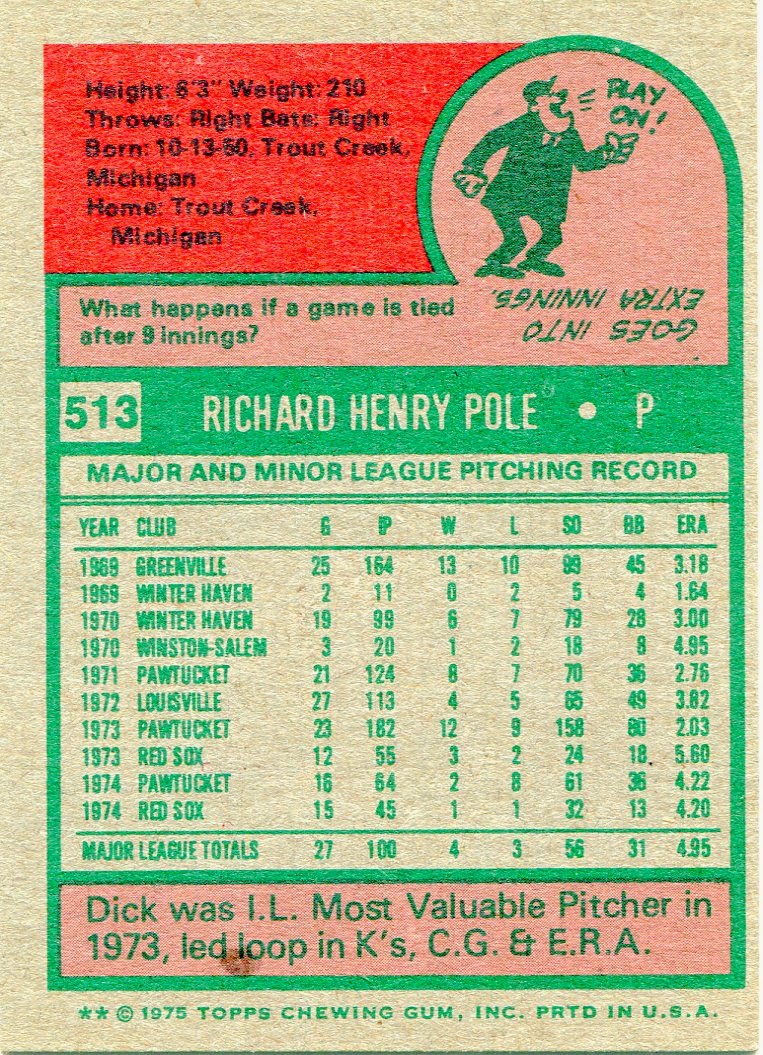 Nothing warms the cockles quite like a punchy dick joke. Of course, that's in no way a slam on today's Names of the Game subject, right-handed pitcher Richard Henry Dick Pole, who interestingly had the talent to make a living from a sport known for bats, balls and wood.

Not that his name would be any less amusing if he were, say, a men's bathroom attendant or florist. Thankfully for the adolescent in all of us, he specialized in a profession featuring oversized business cards with color pictures and bold names. 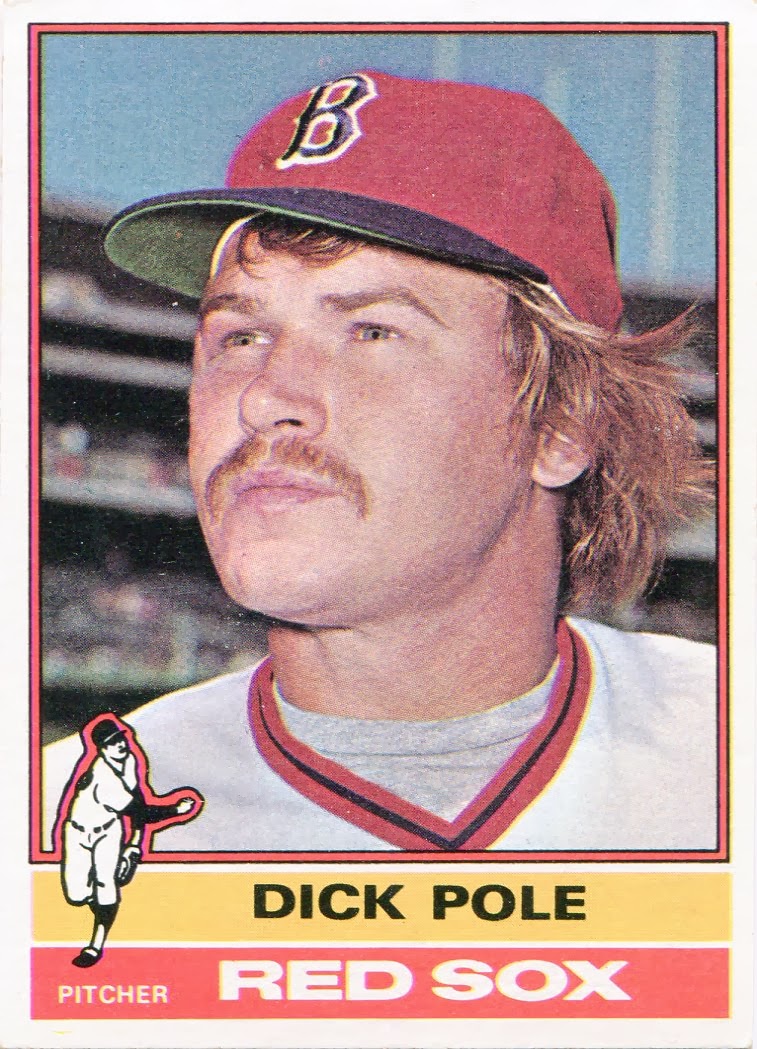 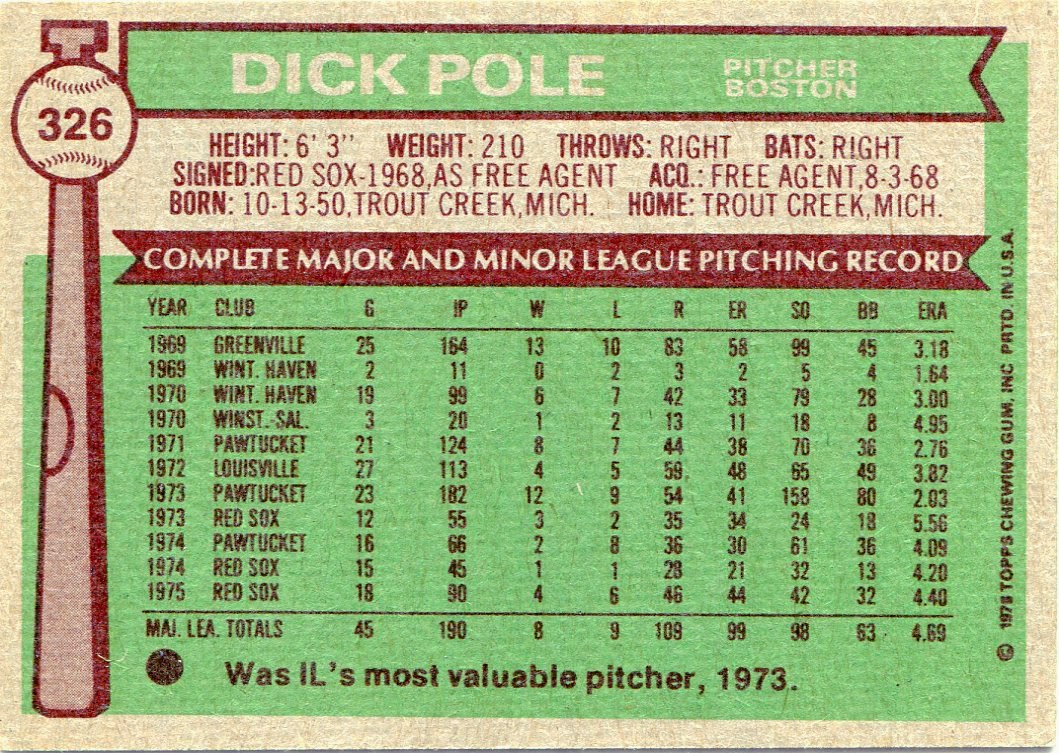 It's a Name of the Game that's turned many an adult into a giggly, pimply juvenile when holding his cards, Beavis and Butt-head and me foremost. Dick chucked it for six seasons as a member of the Red Sox and Mariners, won 25 games and served up Reggie Jackson's 300th dinger in '77.
It wasn't all wisecracks and yuks on June 20, 1975, when Pole was pitching to the Orioles' Tony Muser, whose liner broke his jaw and damaged his retina. Pole's career was nearly finished, but he recovered and even pitched in Game 5 of the World Series against the Reds in October.

He clearly was never the same, this young stud from Trout Creek, Mich., who emerged from the Red Sox system as a top prospect; he even spun a no-hitter for Triple-A Pawtucket in '73. Pole was exposed in the '76 Expansion Draft, and the Mariners grabbed Dick with the seventh pick. He'd go on to win 11 games in his two seasons in Seattle. 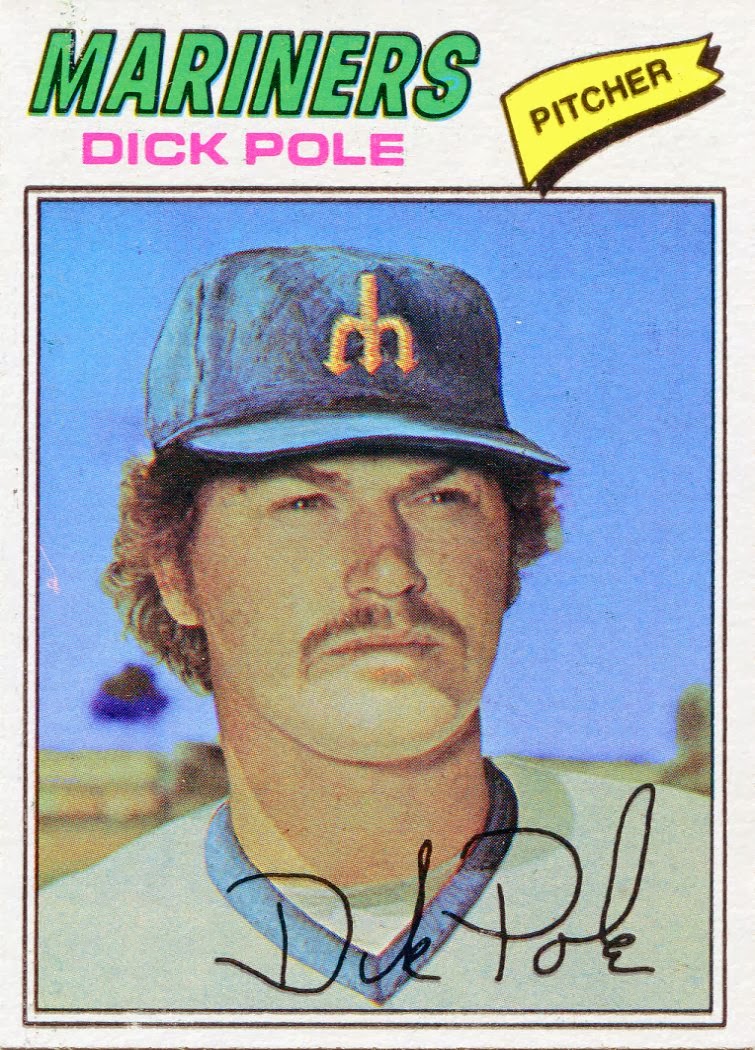 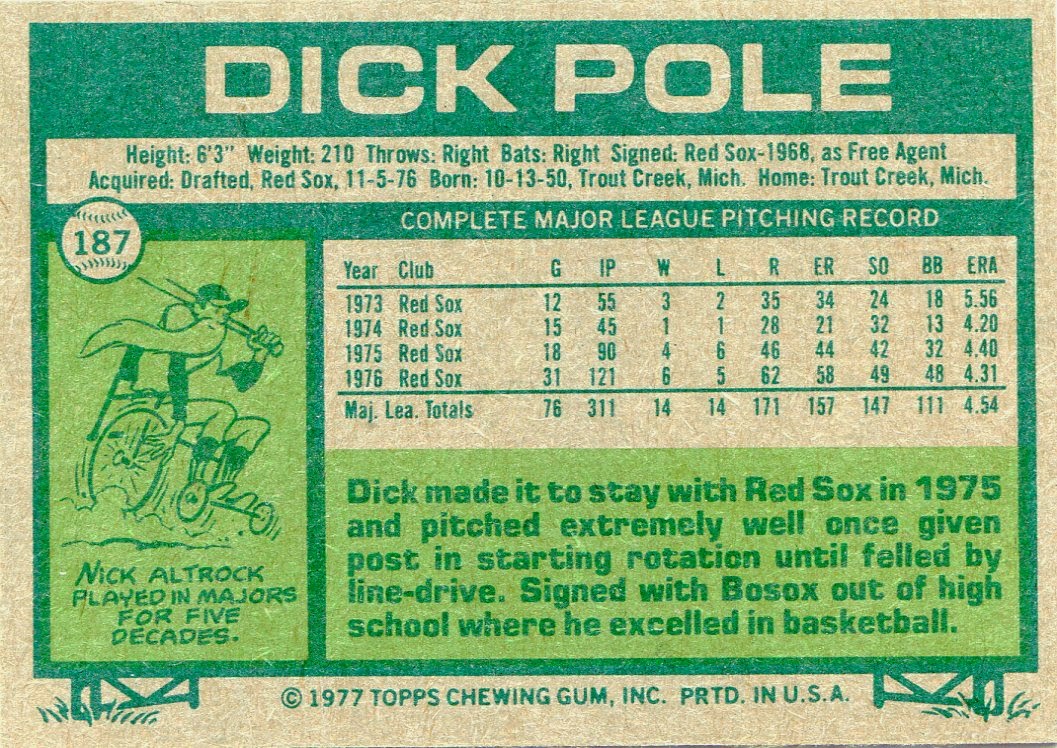 Pole was released by the Mariners in March 1979 and began his 26-year coaching career in '83, primarily as a pitching coach with seven teams. With the Cubs, his prize pupil was Greg Maddux, who credits Pole with his rise. Pole's been out of baseball since the Reds fired him as pitching coach in '09.
Enough dicking around for one day. We'll leave Johnny Dickshot for another day. 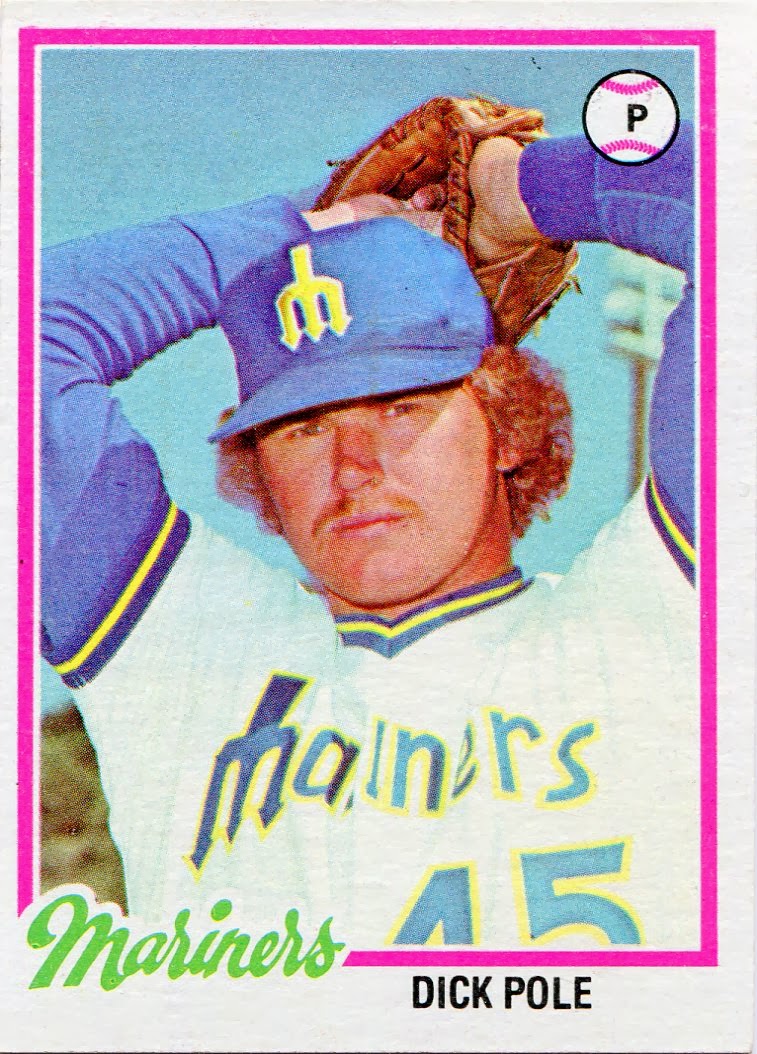 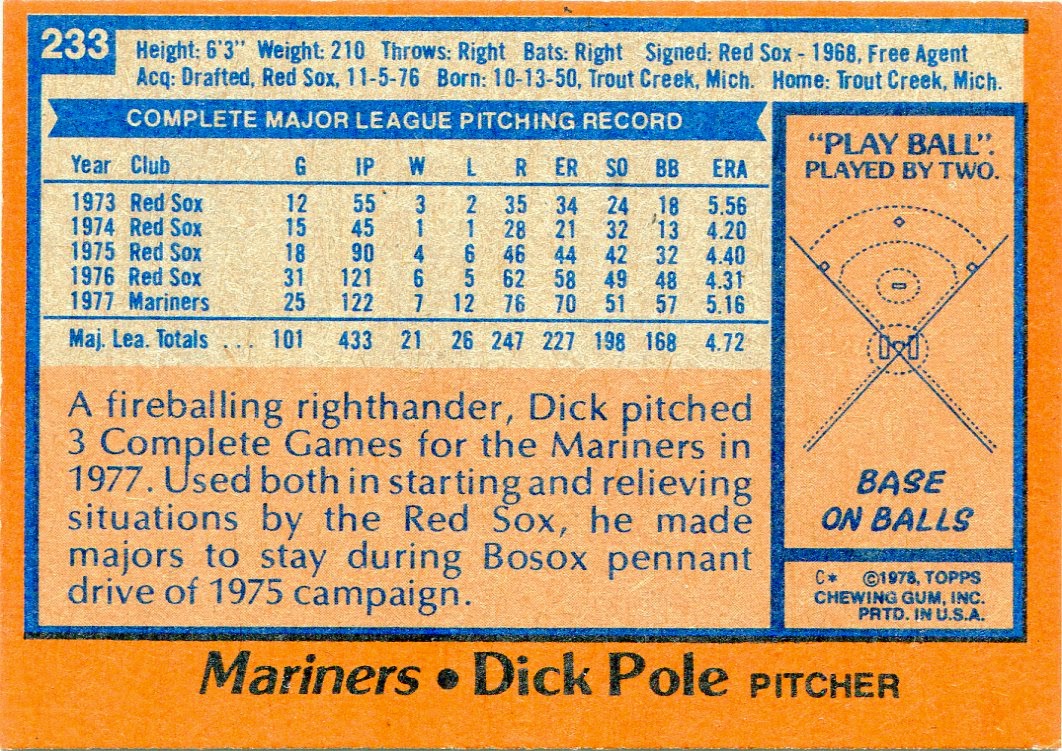 Email ThisBlogThis!Share to TwitterShare to FacebookShare to Pinterest
Labels: Dick Pole, Names of the Game